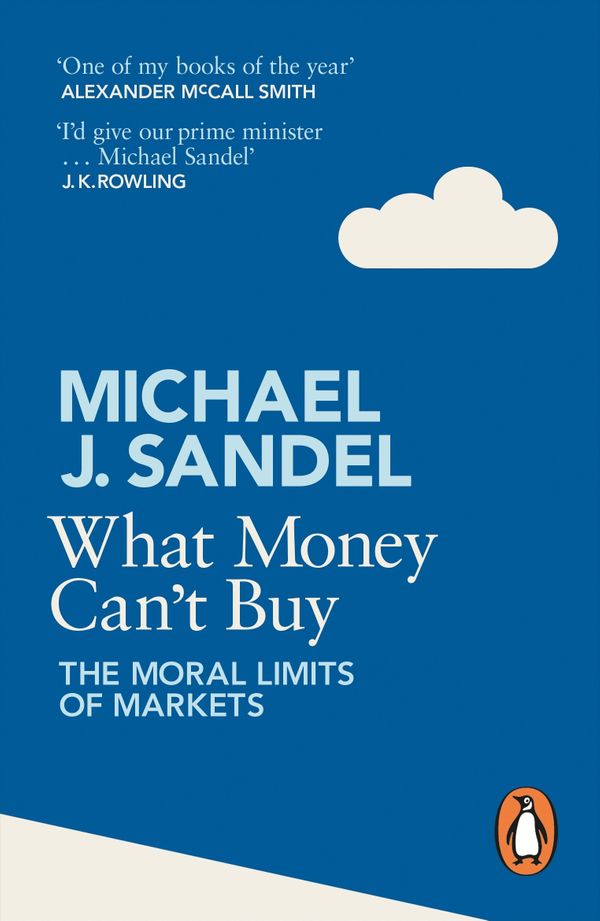 Is there anything which we shouldn't allow money to buy? What Money Can't Buy - The Moral Limits of Markets is a call for public discussion on preserving things such as political hearings or naming rights off the reach of markets.

Michael J. Sandel joins the restricted list of authors whose books we reviewed more than once at BetaGlyph (Justice in 2016). Sandel is a renowned professor of political science at Harvard University, whose popular course was the first to be published freely online by Harvard.

What Money Can't Buy deals with the questions around whether allowing the buying and selling of almost all aspects in our life is leading us towards a better society. Clearly, Sandel believes there are things which money shouldn't buy, although he doesn't directly state that opinion. Instead, the book is laid out as a discussion around the topic, with lots of examples, pros and cons, evidencing that we should reconsider the presence of markets in certain parts of our lives.

The book is exceptionally well organized. Sandel starts by providing examples of the existence of markets in domains which we would have considered off-limits just a few years ago:

"In a society where everything is for sale, life is harder for those of modest means. The more money can buy, the more affluence (or the lack of it) matters." - Michael J. Sandel

Fairness/inequality and corruption are the two main reasons why we should care about what money can buy.

According to Sandel, being able to buy yachts and expensive vacations would not be a reason to worry. However, when being rich means you can buy political power, access to elite schools and hospitals, the inequality gap will tend to widen more and more.

The other main argument, corruption, is that a good involved in a transaction might be corrupted or lose its value because it is being transacted. For example, paying for your kid to be admitted in an elite university will degrade the good itself - university admission. It will generally become less valuable, or respectable, to join an elite school.

Putting the Morals in the Economics

Each of the book's chapters focuses on a different market, from line-standing markets, through incentives markets, and to markets in life and death.

One of the examples concerns the free Shakespeare theater shows in New York's Central Park. Tickets for this yearly production run out rather quickly and the lines to get them get fairly long. Cunning entrepreneurs started a line-standing business where someone will stand in line to get your ticket for a fee which can go up to 125$. At first, we might think there is nothing wrong with this business, free markets are efficiently at work and there is even an extra job being created for the line-stander.

Well, there are some arguments against it. The first argument is that it is unfair for those who can't afford to pay someone to stand in line. You might say that the market is giving the ticket to the person who wants it more badly. But paying 125$ for the ticket reflects more the ability of someone to pay, rather than pure willingness to watch the show. This means it is not true that markets will always get the good to those who value it the most. It depends on the particular situation and on the good being traded.

The second argument is the corruption one. Organizers of the Shakespeare play see it as their gift to the city. It should be a festival where Shakespeare becomes accessible to people of any means. Putting a price on the tickets completely changes the nature of this experience for both participants and organizers.

Another example is the luxury boxes to watch sports events. More and more stadiums have comfortable, expensive rooms from which rich people can watch their favourite football or baseball team. Despite the obvious advantages and extra income for event organizers, this practice is problematic because it reduces the chances of encounter between people of different social classes. And when our society doesn't provide opportunity for such encounters, our democracy and social life suffers.

Most economists shy away from morals, considering that moral conceptions should not be taken into account when designing an economic system. As we've seen above, Sandel believes that trading in a good actually changes the nature of that good, and as such, the existence of a market is in itself a decision which involves moral - a decision on what we decide to prioritize.

What Money Can't Buy is a very important book. Free markets have been the engine behind major developments since the mid twentieth century. It is undeniable that they have contributed to building the modern world. But questioning which are the aspects of a good life that we may want to prioritize over economic freedom is a refreshing logical interrogation. It is not that markets are wrong, it is just that they might not belong everywhere.

The book is interesting to read and easy to follow. Michael J. Sandel does not leave stones unturned when analysing different examples. He honestly addresses and mentions the arguments in favour of markets instead of just focusing on those which confirm his opinion.

However, the succession of market examples falls just short of being repetitive. I found this to be the biggest flaw of the book. Sandel's arguments build up nicely in the beginning, but the rest of the book is rather an analysis of pros and cons of markets in different areas. I wish there was a build up to a final chapter where Sandel exposes conclusions on where markets actually should belong or not.

All in all, this is definitely an eye-opening book which everyone should read. Highly recommended.