Justice: What's the right thing to do? 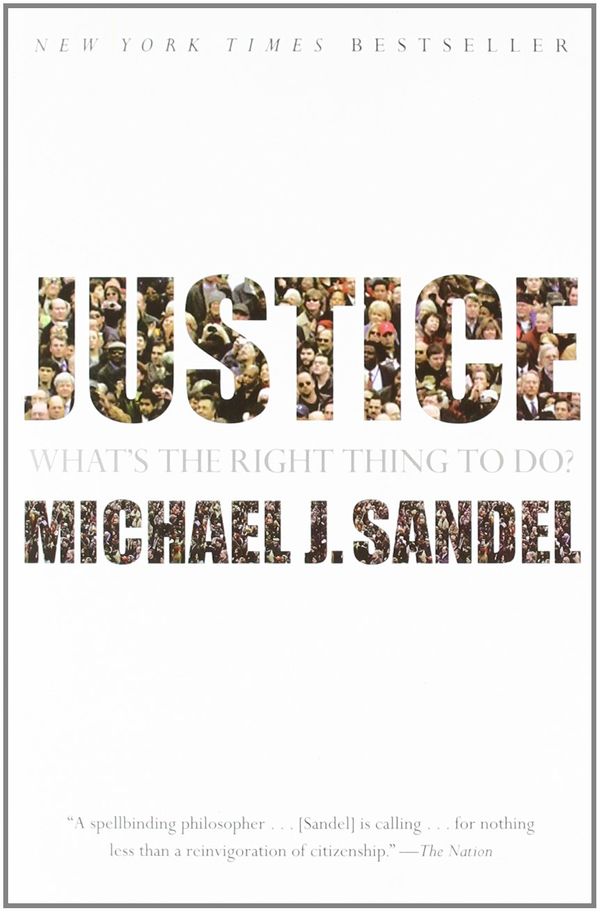 Personal Development
Reviewed a year ago by Ivan Bielik

On December 9, 2015, I read the article on the New York Times about the affirmative action case at the US Supreme Court. Abigail Fisher, the plaintiff, argues that the decision of the University of Texas to deny her admission was unconstitutional (more information through the link above). At the core of the case, the questions get tough. Does race qualify as a legitimate condition for university admission? What is the purpose of a university in a modern society? As a curious mind I am glad to listen to people who can help me to shape my reasoning about such matters.

Michael Sandel, a professor of political science at the Harvard University, writes and teaches about core public issues (like affirmative actions) in our societies. Justice is a product of his experience as a lecturer, a public philosopher and a citizen. It introduces great minds in philosophy from Aristotle to Mills and to Rawls, but it does not offer definite answers to worlds toughest moral questions. Sandel moves back and forth in moral reasoning through existing cases. It is the book that helped me understand ethical concepts.

"In terms we can all understand, [Justice] confronts us with the concepts that lurk, so often unacknowledged, beneath our conflicts." - Jonathan Rauch, The New York Times Book Review

It is not comfortable

I can think of two basic reasons why nowadays we do not want to talk about difficult ethical questions. First, such talks challenge our beliefs and identity. We do not want to compromise on what we believe in. It is not fun either.

Second, we avoid ethical questions because we do not know how to talk about them. Public servants tell us our religions, values or upbringing should stay away from a public. A state is here to ensure a neutral public discussion. We come from different backgrounds and families, therefore, such particularities do not belong to the public space. And the recent politics strengthens the trend. Less public controversy means pleasing more people.

But the reality shows another side of the coin. Sandel argues that our moral reasoning should not be an obstacle to tackle difficult issues at the public. Even if it is an uncomfortable feeling, the democratic discussion about what we believe is right or wrong is legitimate. The most important aspect is to recognise, which reasons we use to justify our opinions. Whether it is a debate about gay marriage, selling body organs, anti-terrorist acts or nationalism, Justice shows that a reasonable discussion about these matters is possible. The democratic discussion can cherish only when we take our moral reasoning to the public and confront each other.

Sandel does not explain various philosophical approaches in chronological order. In his words, I can understand the moral philosophy through three core elements - Happiness, Freedom and Virtue. Philosophers are usually convinced that one element is superior to others when it comes to justice. Great minds of Mill, Kant, Aristotle, Rawls or Nozick are much easier to analyse then.

It is useful to demonstrate this on a example of progressive taxation.

The example shows what different views on morality exist. Sandel argues that by understanding them, we can handle our public debates in a more democratic manner. Morality is not a zero-sum game where one party has to win or lose. It is a complex discipline, which requires constant assessment of our moral beliefs.

The text flows without necessary interruptions throughout the whole book. The language of the book is clear and accessible to most English speakers. Sandel is famous for his engaging style of teaching. His book follows the pattern. (Sandel's undergraduate course "Justice" is among one of the most highly attended in Harvard's history for a reason.) It is a constant dialogue between me as a reader, Michael Sandel as a guide and various philosophers as teachers.

However, the book does discuss difficult, abstract ideas that confront our cherished beliefs and values. It requires focus and time to grasp the different approaches to morality. But I would say that to us, readers of this blog, it is something that can challenge our reasoning and, consequently, improve our way of thinking. A mind that aims to grow needs challenges, doesn't it?

This post was written by Ivan Bielik (@bielik_ivan), a guest author at BetaGlyph. You can find out more about the author at betaglyph.com/about.