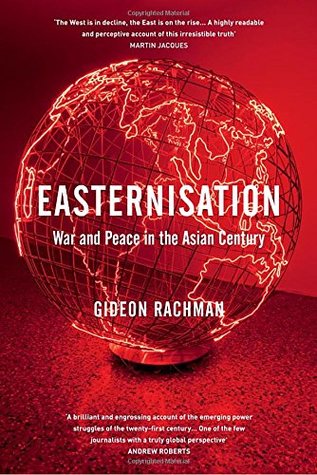 Which region will be the leading the world in the 21st century? In Easternization, Gideon Rachman provides convincing arguments that the 21st century will be dominated by countries in the far east, in particular China, India and the South-East Asia region.

Gideon Rachman is a British journalist and expert on foreign affairs. Having previously been a correspondent for The Economist in different countries, Rachman is currently working as a columnist for the Financial Times.

China vs USA - the fight for number 1

According the one IMF metric, GDP adjusted for Purchasing Power Parity, China is since 2014 the world's largest economy. In a world which has been dominated by Western powers (Europe and the US) for the past centuries, China's rise is a telling sign of the greater importance of Eastern countries in the global scene.

Actually, Rachman makes China, and its rivalry with the US, the main focus of the book. Citing other authors who argue that a rising power (China) will always challenge the incumbent power (US), Rachman discusses all the geopolitical moves of these two countries in their attempt to be the number one superpower in the world.

"For more than 500 years, ever since the dawn of the European colonial age, the fates of countries and peoples in Asia, Africa and the Americas were shaped by developments and decisions made in Europe - and later, the United States. But the West's centuries-long domination of world affairs is now coming to a close." - Gideon Rachman

Chinese ambitions are evidenced by its claims for bigger parts of the South China Sea (clashing with Japan, Vietnam, and the Philippines), Chinese investments in foreign countries, and the Nationalism promoted by the Chinese Communist Party.

We learn about the many moves by the US and China in trying to influence the countries of the Pacific region. Recognising the growing importance of the region, Barack Obama announced a pacific pivot, shifting focus from Europe and the Middle East to east Asia. However, the rise of the Arab Spring and the civil war in Syria and Iraq prevented the US from focusing on Asia.

Meanwhile, China has stepped up its territorial claims for the Senkaku Islands which are also claimed by Japan (backed by the US). Rival fighter jets flying close together or warships moving in the same waters have prompted dangerous encounters over the past years, and Rachman warns about the real threat that this conflict for uninhabited islands will spiral out of control into a war between China and the US.

Through the lens of China's rise, Easternization also focuses on how it is affecting its neighbours, and other world regions.

India appears to be the only challenger to Chinese dominance in Asia. The country has also had spectacular growth rates over the last decades, and its 1.3 billion population should not be disregarded. Especially when 65% of India's population is under 30 years old. However, the Indian economy is still circa 5 times smaller than China's, meaning that there is still a long way to go for India to position itself as number 1.

Rachman also covers the situation in Europe, denouncing the inability of European countries to influence world affairs. Moreover, countries such as Russia, which traditionally have tried to approach Europe, are now looking East in an attempt to get on board the Asian boom.

"The financial crisis of 2008 forced deep cuts in both French and British military spending. Add to that the insularity of Germany - the most powerful and populous nation in the EU and the fourth-largest economy in the world - and the emerging picture was of a Europe that was dissolving its ability to play a global role." - Gideon Rachman

In his concluding chapters, Rachman argues that the West still controls most of the world affairs through institutions such as the IMF, World Bank, or even the Dollar, but that such institutions should open more and more to Eastern countries or else they would create their own opposing institutions. Easternization is a global trend, and we should all get used to it.

Easternization is a great book to learn about the rise of East Asian countries, China's strategic ambitions, as well as all the geopolitics for control of influence between China and the US. It is an interesting and engaging book to read (I guess it helps that the author is a journalist who writes professionally every day).

I would have liked to see the book focusing more on the impact of easternization on culture and ways of living around the world, rather than so much focus on geopolitics. And all in all, it feels sad to focus so much on rivalries between countries - I wish the world powers would be more interested in helping each other grow.

Nonetheless, I would recommend Easternization to anyone interested in knowing more about Asia, and the countries which will generate the most wealth in the 21st century.