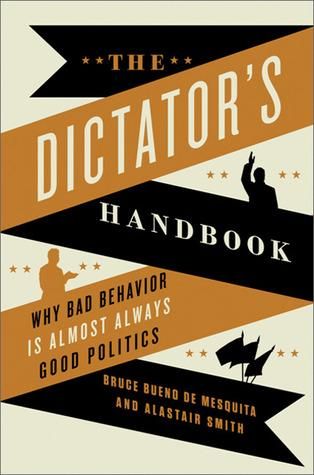 Politics
Reviewed a year ago by Hugo Volz Oliveira

This book’s subtitle is a clue to the rules of politics. That the majority of organizational leaders, from religions to states and businesses, want as much power as possible and to keep it for as long as they can. Governing is the art and science of achieving it.

Unfortunately, such good political skills mostly stem from bad behavior, which harms us all. Welcome to the darker side of the ‘private vices, public virtues’! But, what can we do to change it?

Politics matters to all of us. By definition it is what concerns the citizens. So it deeply affects our lives that most leaders have despicable behaviors. As there are few signs of change, the starting point to make them better is for us to try to learn how and why they are as they are, instead of jumping first into how they should be.

Twenty years ago, Bruce Bueno de Mesquita and Alastair Smith were looking into what were the consequences for a state’s leader when a war was lost. From that perspective, they started to see leaders’ interests as the driving force of a nation or organization’s fate, instead of the old paradigm which asserted that the abstract concepts of states, nations, businesses and systems had their own interests. No, they don't. People do. And some people’s interests have more impact than others.

In the meanwhile, they developed the full theory that forms the five rules for all kinds of wannabe dictators: the selectorate theory.

The basis of this theory is that no leader can lead unilaterally. The etymology of monarchy is a trap. No one governs alone and no one governs those who don't want to be governed. Such groups can only be ignored up to the extent they don't matter to the political survival of the leader. L’etat, c’est nous.

Leaders just have to understand how to define who is ‘us’ and how to control them.

All that varies is how many backs have to be scratched and how big the supply of backs available for scratching.

The five rules summarize how to scratch those backs by analyzing the three groups of people that intervene in the process of allowing someone to first come and then to stay in power, in small and large organizations: the nominal selectorate, the real selectorate and the winning coalition.

With this we can see politics as a three-dimensional space. Military juntas and most companies are governed based on a small number of interchangeables, influentials and essentials, allowing them to invest in benefiting only a few.

Democracies and other organizations depend on a very large number of people in all groups, forcing them to care more about everyone. Change one of these variables and the incentives for leaders’ behavior also change. Imagine if Donald Trump was born in North Korea!

C’mon! I want to be a dictator, bring me the rules! Now!

Okay! Remember, the goal is not to answer the ‘big questions’, the rights or wrongs, but to work out why people do what they do so we can learn how to make it in their interest to do better things.

Wait, being a dictator in a democracy is hard! Yes, it's on purpose! Fortunately, some rules are impossible to follow here, but most leaders around us try hard to follow them as closely as we let them! Elections don't mean freedom from autocrats. Even some Kings have been elected. And many autocrats provide more freedom and prosperity to their people than some so-called democrats.

A man always has two reasons for doing anything: a good reason and the real reason. - J.P. Morgan

To further understand how to become a successful dictator I recommend you to read the book and its wonderful examples. From exposing corruption at FIFA (the book was written back in 2011), the IOC or the Palestinian Authority, and how to counterintuitively defeat it; to explaining the success of Singapore’s Lee Kwan Yew and China’s Deng Xiaoping, compared to the failures of so many autocrats.

You bump into those and other stories, from the rise of Harvey Milk in San Francisco to the fall of Carly Fiorina at HP, in a simple style that despite failing to be ‘Gladwell meets Freakonomics in the House of Cards’ is still almost as appealing as power itself!

The essential lesson of politics is that ruling is the objective, not ruling well. So, if we want to have better leaders, who eventually rule well, we need to ensure that ruling well is the only way to rule. Accepting less than that is compromising the output of the political system.

To change for the better all citizens need to be able to be part of the real selectorate and of the winning coalition. If these groups are small then corruption and inefficiency will abound. Expand all of the groups, ensuring a large coalition that is a large proportion of the selectorate, and everyone will prosper from the system.

One last moment of silence to all the CEOs receiving massive bonus regardless of the company’s performance.

This post was written by Hugo Volz Oliveira, a guest author at BetaGlyph. You can find out more about the author at betaglyph.comhttps://www.betaglyph.com/about.