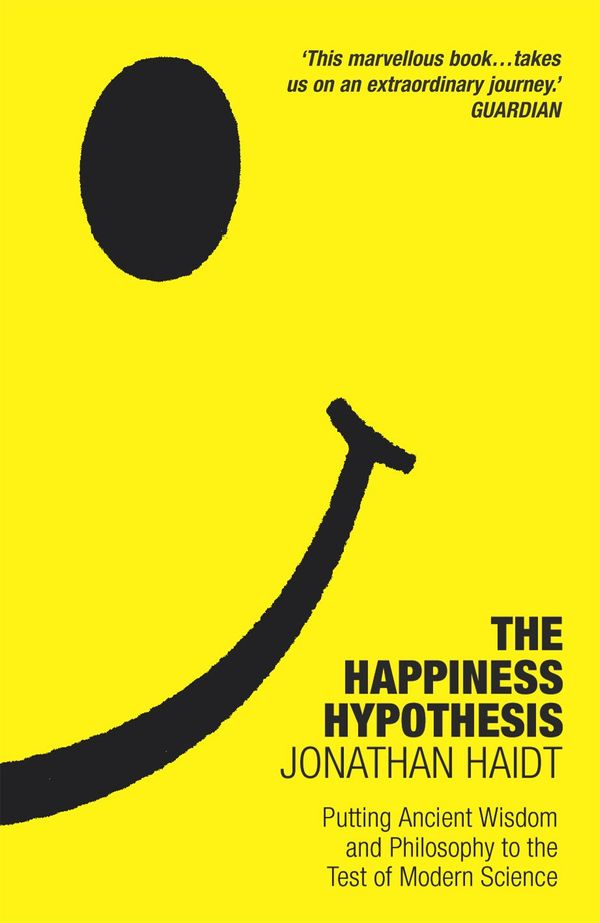 Personal Development
Reviewed a year ago by Nuno Carneiro

How should we live our life in order to be happy? The Happiness Hypothesis is the first book by psychologist Jonathan Haidt, today a professor of business ethics at New York University and an expert in the field of psychology concerned with morality. He approaches this centuries-old question by studying great works of philosophy and modern science to build a compelling vision of how our mind works.

While preparing to write The Happiness Hypothesis, Haidt went looking for wisdom in works of different cultures such as the Bhagavad Gita, the Tao te Ching, the Old and New Testaments, or the Koran. And as a psychologist, he brings us an enriched excursion by comparing the words of the old philosophers with modern studies of psychology and neuroscience (as of 2006).

A first step in our search for what makes us happy is to understand that our self is composed by a multitude of systems residing in our bodies and brain. Haidt uses a metaphor (an old trick of ancient philosophers) to describe this division: our mind can be thought of as an elephant (our emotional and automatic systems) on top of which sits a rider (our reasoning).

The rider can control and direct the elephant, but only to a certain extent. If he wants to, the elephant does whatever he wants and there is little the rider can do to stop it. In other words, we can use reasoning to guide our lives, but a huge part of who we are and what we do is dictated by automatic systems not immediately controlled by reason (part of this division was later popularized as System 1 and System 2 in Thinking Fast, and Slow by Daniel Kahneman). And to make things more difficult, our elephant didn't evolve to makes us happy and will often fight against your own good - ever wondered why it can be so hard to go out for a run even though you know it is excellent for your health?

"Our life is the creation of our mind", Buddha

When we realize about all the power the elephant has, it becomes clear that reason alone won't get us where we want to be. Buddha said that life was the creation of our mind. In part, it is true, but the way around it isn't simply to imagine a better life. We must learn to train the elephant, so far as he allows us to do so.

Balance between the within and the without

Studies of twins separated at birth showed that 50% to 80% of all variance in people's average levels of happiness can be explained by genes. It seems we all have a biological happiness set point, a sort of lottery ticket we get at birth, which dictates in large part which average values our happiness levels fluctuate around.

However, there are ways to change your mind and influence your average levels. Haidt suggests there are 3 we know of: Meditation, Cognitive Therapy, and anti-depressant drugs.

As for conditions, it seems to be true what ancient philosophers also knew: money won't bring you happiness. The adaptation principle states that as we acquire more wealth, our brain adapts to the new levels.

But there are other external conditions in life which do affect happiness: noise, long commutes, feeling lack of control, shame, and the most powerful one, relationships.

As for goals, it is confirmed that "it is all about the journey". If we set out to achieve a certain goal, we might get pleasure from the moment of achievement. But it is the moments when we make steps towards the goal, the progress, which gives us the majority of the gratification.

From Plato to Benjamin Franklin, the book goes on to discuss more areas of life which are thought to influence happiness: facing obstacles, love, spirituality, or chasing virtuosity; mostly using supporting evidence from 20th century psychology work by authors such as Dunning, Maslow, Harlow, Csikszentmihaly, or Pennebaker.

"We can't simply select a destination and then walk there directly - the rider does not have that much authority. But by drawing on humanity's greatest ideas and best science, we can train the elephant, know our possibilities as well as our limits, and live wisely.", Jonathan Haidt

The conclusion is that happiness comes from a many different activities, some of them focusing inward, some others focused outwards in relationships and external conditions for a good life. It also comes from finding coherence in our personality (our traits being coherent with our coping mechanisms and what we imagine as our life story) and the different aspects of our lives such as the work we do and the relationships we have.

The Happiness Hypothesis is really a great book. At a little over 200 pages, the length of the book is what I consider just perfect. The author doesn't repeat himself, it reads very easily and you'll never find yourself bored, even as you dive deep into concepts of ancient wisdom or scientific studies.

Learning about how so much of what we do is dictated by genes, or how our brains evolved to use selfishness to win at natural selection, made me less self-righteous. It is now easier to understand my own failings and other's as well. I'm left with the impression that our brains seem to be a sort of evolutionary patchwork built to serve us in a very different setting than where we live today. I also find it now easier to see the elephant in me and guide him to be more of service of my own happiness.

As I concluded reading the book in 2020, I was left with an urge to find out what we have learned about the brain since the book came out. I would love to have a review which points out when and where the hypotheses were further confirmed or refuted by the latest advancements in neuroscience.

Looking back at this review, there is so much I couldn't include here and I can't help but consider The Happiness Hypothesis a must-read book which I would advise anyone to pick up.