The Art of Happiness: A Handbook for Living 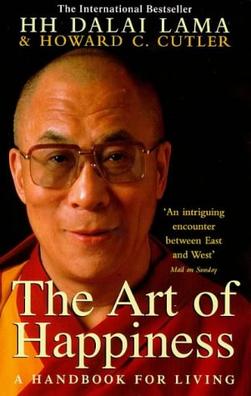 Psychology
Reviewed a year ago by Nuno Carneiro

The Art of Happinness is an introduction to the way of living of the Dalai Lama, written by the American psychologist Howard Cutler. The book is narrated by Cutler and transcribes many interviews he had with the Dalai Lama over the course of several years.

This western-eastern author duality proves to be quite interesting, making this a nice book to read for anyone interested in learning more about Tibetan Buddhism, or simply interested in happiness.

Finding happiness is the meaning of life

The main premise of the book is that all human beings seek happiness and that this search is the meaning of our lives. The understanding, the Dalai Lama says - that happiness is achievable - is the first step in leading a happy life.

If happiness is indeed achievable, how can we find it? The proposed approach focuses on finding the roots of happy feelings and nurturing them, while avoiding the roots of bad feelings. Sounds simple, doesn't it?

"Sometimes it is the most basic and straightforward advice, the kind that we tend to dismiss as naive, that can be the most effective means of enhancing communication." - Howard Cutler

Compassion is the most discussed feeling in the book. Described as sharing someone else's suffering, it is, according to the Dalai Lama, the most important feeling to nurture in order to achieve happiness. Genuine compassion is the act of finding common ground with other human beings by recognizing their wishes for their own happiness.

Once you extend your ability for compassion, you will more easily engage in altruist acts, live with more affection and, ultimately, be happier.

Education is the first step towards change

Along the book, the authors cover many topics such as dealing with suffering, changing perspectives (accepting the point of view of others), finding balance in life ("not too much studying, nor too much meditation"), among many others.

Interestingly, education is seen as the first step towards internal change. This reminder about the importance of education is especially powerful when coming from one of the worlds spiritual leaders. Indeed, the Dalai Lama points to education (seeking to learn), and not any esoteric concept, as one crucial element in achieving spiritual enlightenment.

Moreover, the path to internal change proposed by the Dalai Lama of education, conviction, persistence and action, resembles a lot the path drawn by many authors of management books. However non-spiritual this may sound, I see a pattern in what can bring us happiness and what can bring us career success.

For instance, when the Dalai Lama argues about the need not to worry excessively, it immediately reminds me of the 1st of The Seven Habits of Highly Effective People by Stephen Covey - to be proactive and act on things which we can influence, not worrying about those which we cannot have an impact on.

"It takes an equally long time to establish new habits that bring happiness. There is not getting around these essential ingredients: determination, effort and time. These are the real secrets to happiness." - Howard Cutler

I guess these techniques can be effective in bringing us down whichever path we choose, and I hope the Dalai Lama is right: that happiness is there at the end of a path, and that we just need to walk it.

The Art of Happiness is easy to read and follow, but not the kind book that makes you want to read it in one day. Howard Cutler complements every chapter by citing cientific studies which sustain the Dalai Lama's claims about the origins of happiness. Very often, he also acts as a sceptic in his interviews, enriching the debate with the Dalai Lama with thoughtful questions.

The book reads like a frank discussion about the Dalai Lama's thoughts on happiness, rather than a spiritual book. Having never read any other work about the Dalai Lama, I got a picture of a great warm-hearted person, a monk dedicated to his role as a spiritual leader, who nonetheless uses rationale to explain us his convictions.

I would recommend reading the Art of Happiness as an introduction to anyone interested in leading a happy life. And isn't that what we all want?

Hooked: How to Build Habit-Forming Products

By Nir Eyal (2014) Pages: 256, Final verdict: Great-read Can you hook your intended users to your product as you are hooked to your favorite phone apps? Do you want to learn the behavioral techniques used by Twitter, Instagram, Facebook, and others? This book shows you practical insights to create... Read more

Mindset: The New Psychology of Success

By Carol Dweck (2007) Pages: 276,Final verdict: Should-read Is intelligence a birth right or a quality that can be developed? How can the way we face setbacks have a decisive impact on our lives, and more importantly, how can it help set ourselves for success? In a book chosen... Read more