The Escape from Hunger and Premature Death, 1700–2100: Europe, America, and the Third World 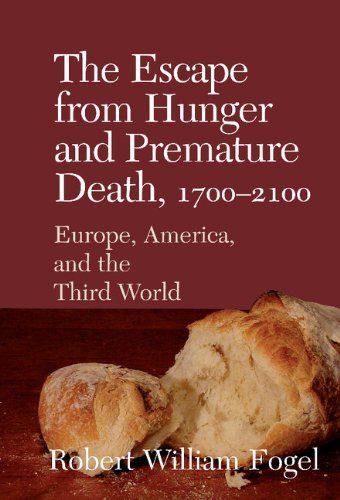 It is hard to understate just how much things have changed in the past 300 years. We escaped ignorance and became aware of the universe, developed the scientific method and seized control our environment, while in the process becoming healthier, wealthier and happier.

Robert Fogel, winner of the 1993 Nobel prize in economics, takes a thermodynamic approach to examine the progress of the last 3 centuries. In a book based on a series of lectures taught at Cambridge in 1996, he analyses history from a technophysio lenses, studying the relationship between the advances in technology and its effects on human physiology - longevity, caloric consumption and body measures.

Measuring progress in kgs, not $

To support his thesis that true progress needs to be measured at the biomedical scale, Fogel leans on nutritional and physiological data. A lot of data. The primary data sources are food balance sheets - estimations of food supply based on the economic activity of the agricultural and trade sectors (available since the 1780s in France and the 1700s in UK)- and physique measures of the population such as weight, height and BMI (body mass index).

With the data at hand and armed with the full repertoire of a 101 nutrition class, Fogel investigates how the sharp increases in caloric output (having more energy available for non-metabolic tasks) lead to gigantic improvements in body size, chronic diseases uptake, mortality rates and overall longevity. That, he argues, is one of the big reasons why in the last 300 years we doubled our longevity, increased our body size by 50%, grew ~10 cms taller.

This leap in size and health, Fogel estimates, is rooted on the technological changes and investments in public health projects such as the purification of the supply of water and milk, the introduction of sewage systems in urban areas and the transition to electricity. He adds that pure economic indicators are often not accurate in representing progress, and it is insightful to read the comparison between the economic KPIs of the industrial revolution in Britain with its biomedical counterparts such as height, weight or prevalence of chronic diseases.

If you are a data nerd, you'll feel at right at home, as dozens of charts and tables on all these biomedical stats are presented as the quantifiable counterpart for Fogel's narrative.

As for the 21st century, in the closing chapter of the book, Fogel makes the case for why health care is the growth industry of our generation and adds a brief history lesson on social security and healthcare systems to a final essay on the need to reform the current pension system.

The Escape from Hunger and Premature Death gives you a big bang for its buck. In under 250 pages, it wraps decades long research on nutrition, health and the economy into a digestible book that will make you fell like you are back at a (good) university lecture. And since it mostly covers history of the 18th, 19th & 20th century, reading it 15 years after its publication does not loose the book's appeal.

Lots of graphs, data tables, and other visual artefacts complement the reading and make for a nice change of pace as you'll see yourself slowly digging into tables on the height, weight and other biomedical KPIs of Europeans and US citizens.

Despite not being a great candidate for your e-book library - all the charts and tables weren't meant for the digital e-book world - it makes for a great addition to your atoms based, old and dusty book shelf.