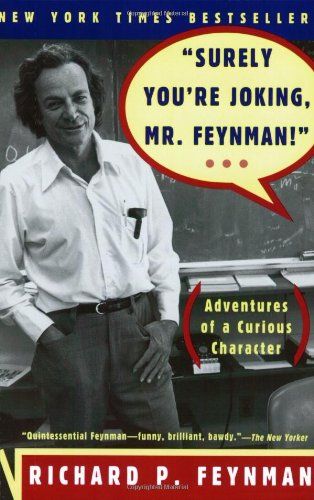 Nobel prize winner, Richard Feynman was one of the most brilliant men of our generation. Google's co-founder Sergey Brin elected this as one of the 2 books which inspired him the most. If you thought that all physicists lead a boring life, this book will prove you wrong.

Richard Feynman was born curious. Raised outside of New York, he was always inventive. One of the first stories we learn is about the time he invented a burglar alarm to keep people away from his room, which ended up causing mayhem when his parents were going to check up on him at night.

His drive to build stuff (and get into trouble) did not come alone, as his father was very important to ignite in him the love for discovering how things worked. He would even sit his son on his lap and read him the Encyclopedia Britannica. It was that inbuilt need to know more about the world that propelled Richard Feynman to a life dedicated to science.

As his work gains more maturity, he delivers his first technical talk. As it would became part of his life, nothing came without a story, and as luck would have it, his first talk would be in front of two physics legends: John von Neumann and Albert Einstein.

However, his stories did not end there. Being a deeply curious men, his life and book was filled with interesting (and often unorthodox) experiences, including:

His eccentricity was not always easy to deal with, and we can get the idea that working alongside him must not have been as entertaining as reading about it.

WWII and Carnaval in Brazil

While some of these adventures were taking place, the world was living through world war II, which was critical at defining the physicist's life.

"When the war began in Europe...I began to think I ought to make some kind of contribution"

He is pulled into war due to his technical skills and after a couple of years, as the United States presence in the war intensified, he goes to Los Alamos to work on the Manhattan project. Here he recollects how difficult life at Los Alamos was, and the distance from his wife, which lost her battle with tuberculosis at that time...

As the war comes to an end, our physicist finds himself depressed and with little sense of purpose, at what appears to have been the most difficult time of his life. His next stop is a 10 month stay in Brazil, where he learns Portuguese, enjoys Carnaval, and finds time to get frustrated at the Brazilian educational system.

The plate that changed the course of physics

Little in the book mentions the work which lead to his nobel prize, except the story that trigged the whole thing. All we are told is that the set up was the Cornell University cafeteria, and what did the trick was observing a spinning food plate. That, coupled with a genius mind, made physics history.

"I don't remember how I did it, but I ultimately worked out what the motion of the mass particles is, and how all the accelerations balance to make it come out two to one"

We are soon taken into his life after moving back to the US, with several other stories about how he discovered a passion for painting, performing as a drummer in San Francisco and his work to decipher Mayan hieroglyphs.

More curiosity to the world

The biggest takeaway from Feynman’s book is not about his brilliance and genius, or about any of his particular adventures. It is about his naiveness and embedded curiosity of the world.

I admire his practical way of looking at things and restless pursuit of discovery. And I like to think that if we all carried more of Feynman's curiosity and open mindness in our lives, we would find more inspiration in the world surrounding us.

It was by drawing inspiration from people like Richard Feynamn that we started BetaGlyph, with the motto to "Bring more curiosity to the world". We firmly stand by it, and it's an awesome motto to live by.

A great storyteller and always with a quirky sense of humor, Richard Feynman shares with us his entertaining life as a physicist, an artist, and a man of the world. Being an autobiography and given the peculiarities of the author, we are better off taking the stories with a grain of salt.

Watch the documentary, learn about Feynman and you will be inspired to spend a few hours in his company, on his journeys from Boston to Brazil, and from the War to the Nobel Prize.