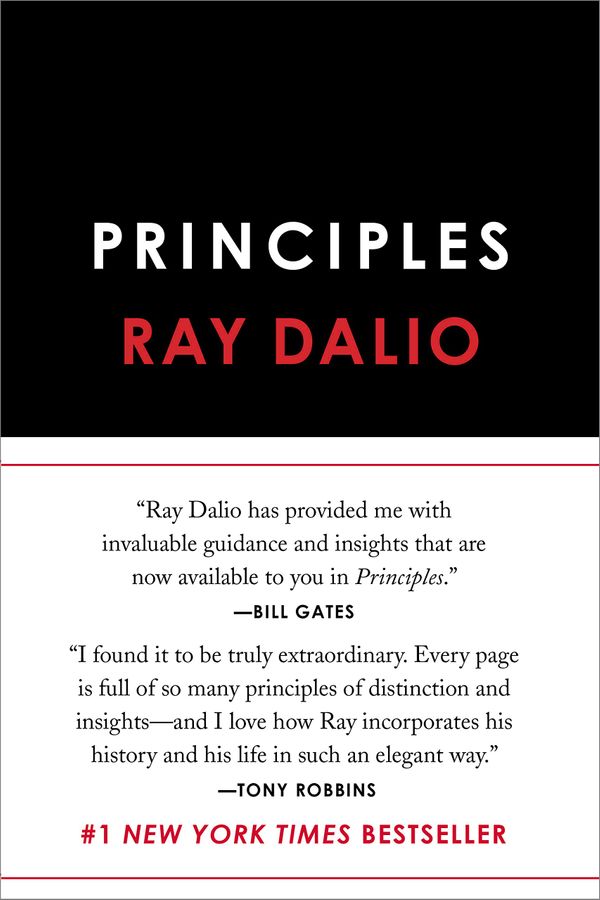 What principles does one of the most successful investment managers of the last 40 years live by?

At some point in life people decide it is time to share their recipe for success. For Ray Dalio, that time came at the age of 68, after building the investment management company he founded, Bridgewater Associates, into arguably the most successful investment management business in the world.

Principles: Life and Work is exactly the compendium of the principles Dalio follows in his life and work, and at 552 pages, it is a big compendium indeed.

Principles: Life and Work is a three-part book, where we first find a short autobiographical account of Dalio's career. The two other parts, divided into Life Principles and Work Principles, have a different format, a sort of hundreds-long bullet point list with extensive descriptions of each point. There are even different indented levels into the bullet point list, organizing the principles into higher level, mid-level and sub-principles. You quickly realize that Dalio's main message involves thinking about life and business as machines to be optimized.

The first part of the book is actually the one I found the easiest to read. In about 100 pages we get a glimpse of Dalio's life, from growing up in middle class family in New York, to starting his own company. Far from being the most successful hedge fund manager in the world, Dalio won and lost with his investments in his early career, and his first attempt to start out on his own failed as well.

But with failure came the learnings, which Dalio started observing and recording, prompting his path to modelling the markets as machines, and then using computers to complement his human shortcomings. And modelling was not something to be applied to the markets only. If life is a succession of decisions, there has to be fundamental principles which help us with any situation that life throws at us:

Dalio's principles are strongly anchored on perspective: having the practice of looking at one's life with a certain detachment, facing what is true and deciding what to do about it. This is ultimately reflected his work principles, whose cornerstone is to be open-minded and radically transparent. For Dalio, success is out there for those who are willing to look their shortcomings straight in the eye and work to fix them, in life and in work.

One of main insights shared by Dalio is that progress is achieved when we face painful situations and manage to muster an appropriate response to it. Avoid deluding yourself and make a realistic self-assessment to understand where you failed. If you can use pain of uncomfortable situations to continuously develop a better understanding of your strengths and weaknesses, you'll maximize your potential.

One interesting example is how Dalio, as company CEO, actively promoted getting negative feedback from his work colleagues, even from someone in an entry-level position, so that he could improve his management skills.

Dalio synthesises this continuous self-improvement as a 5-step process:

2. Identify and don't tolerate problems that stand in the way of your achieving those goals.

3. Accurately diagnose the problems to get at their root causes.

4. Design plans that will get you around them.

5. Do what's necessary to push these designs through to results.

We see how these principles build on the fundamental ideas discussed before: you need to coldly assess what is true in the world, independently of your wishes, and leverage it with perspective and willpower to do something about it.

How does this all look like when applied to work? The result is what Dalio calls an idea meritocracy and it's the management model which has been developed at Bridgewater Associates in the past 40 years.

As Dalio's firm grew, these principles were built into management practices based on radical transparency, high accountability and believability decision making - an idea meritocracy where the best ideas win and people's opinions are weighted by how believable they are (their track record in similar situations).

This makes Bridgewater probably one of the most exquisite places to work at in the whole world, with features such as employees voting each other's strengths and weaknesses to be featured  in "baseball cards" about each one or having a sort of big brother recording of all meetings for later evaluation.

Organizing the chapters into lists of principles as bulletpoints makes for a great reference book but not such a great book to read through. It misses the "show, don't tell" factor. In particular, the Work Principles part was very difficult to read, having taken me a few months of on and off reading. At times, the Work Principles even felt like a repetition of the content of previous principles.

Moreover, I would argue that the Work Principles don't really achieve the aim of forming a collection of the most relevant principles to succeed at work. They are very focused on management and from the view of the founder. Sure, everyone can apply principles about making your team deliver quality work, even if you're not a company founder, but that might not be the most relevant principle for someone who is starting his career.

There is also the fact that, despite reading about other people's successes and failures being a good learning accelerator, there is only so much you can absorb from a book. It might be a good idea to just get out there, make your own mistakes, build your own wisdom, and come back to Principles: Life and Work from time to time.

It could also be that I don't have enough perspective and this is Dalio's way of creating a book which can become an encyclopedia of wisdom which people will still read 1000 years from now.

All in all, Ray Dalio has a lot of good insights which we could all use in our lives, topped with a fascinating view of an alternative way to organize a company. Therefore, I recommend Principles: Life and Work to anyone, with one caveat: read through the first 100-200 pages and leave the rest for occasional skimming later on.