Losing the Signal: The Untold Story Behind the Extraordinary Rise and Spectacular Fall of BlackBerry 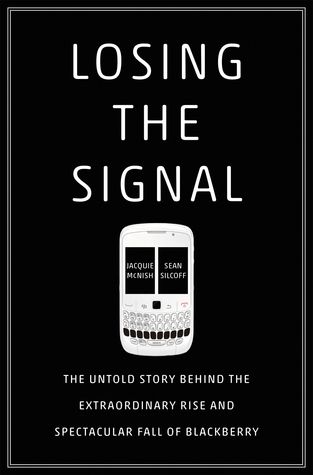 Business History
Reviewed a year ago by Henrique Cruz

By Jacquie McNish and Sean Silcoff (2015)

They were the giants of mobile telecommunications. They represented corporate success. Fidgeting on their keyboard was the signal of power and the aspiration of many. But then, that status was lost.

Jacquie McNish, senior correspondent in Toronto for The Wall Street Journal and Sean Silcoff, reporter at Canada's Globe and Mail, brings us the story of Blackberry. Let's find out how BB went from the top of the hill, to irrelevance.

In some ways, the history of the book's subject starts like many other tech companies before them, with the story of Blackberry revolving around its two main icons:

After a series of lukewarm product successes with RIM, Mike Laziridis path crosses with Jim's after the Harvard graduate decides to buy a stake at Laziridis company. Jim had the ambition and business skills while Mike had the technical wizardry and product vision. Together, the world of wireless communication was soon to be in for a treat.

Blackberry was born out of the wireless data revolution. After the success of the pager, and as other players were jumping into the handheld device industry, RIM identified a gap on the market. For them, the opportunity laid in simplicity, by producing a device with a few, masterfully designed features. For RIM, it was sending and receiving messages and email between devices. No more, no less. And the launchpad for RIM's success came from a trio of revolutionary products:

A complete unknown to the tech scene in America had just taken the spotlight. With the largest IPO in Canadian history in 1997, and a steady revenue stream for Blackberry (85M$ revenue in its first year) and services it was selling to carriers, there was no stopping for the princes of Waterloo. Blackberry proved to be perfect for executives who could know have access to their email and make business decisions from the palm of their hands.

"Blackberry should be reported to the DEA", Intel chairman jokes, given the addiction people had to their BB

The turtleneck that changed the course of Blackberry's history

Blackberry was sexy. The company was doubling its revenue every year, and it held the prestigious place as the fastest growing company in the world. However, and as we have been taught throughout history, being at the top is no indication of continuing there.

The day was January 9th of 2007. The iDay. Wearing his signature black turtleneck, Steve Jobs was about to rock the very foundations of Blackberry's success. As the first iPhone is unveiled, it immediately prompts a reaction both in Waterloo and Mountain View. As Google decides to pursue Apple's direction, Blackberry believed that the technological limitations of the iPhone would prevent it from taking over the market (boy, were they wrong).

However, even for all its flaws, Apple had nailed it. The iPhone experience was far better than anything consumers had ever seen, and the sales of the iPhone took off. As competition joined the race, BB was left behind. In an era personified by the no-keyboard phone, Blackberry had lost its touch. In little over two years, the Canadian company lost leadership of the smartphone market, tumbling from 60% to 10% of share of the carriers cellphone sales.

Looking back, it might seem easy and over simplistic to separate the signal from the noise, and identify key areas where BB was not able to keep themselves ahead of the pack. Still, learning from the history of RIM and drawing comparison from other tech giants, allow me to take a stab at identifying 3 key strategic decisions that, in my opinion, were crucial to derail the former lightning-speed BB train:

Together with these examples, the book covers the ups and downs of Blackberry in the last decade. As an outsider who never followed BB closely, you get a chance to learn about their legal disputes, strategic trade-offs and the gradual decline of their market domination, with subpar products from Storm to the Playbook tablet (which was released with no native email application!).

The final chapters of the book cover how BB co-CEOs started to part ways in their vision for the company and how increased pressure from shareholders led the board to force the duo to step out of the company they had transformed from a niche electronics player into a tech giant.

The rise and fall of organizations, business strategy and technology. Losing the Signal strolls through the story of one of the most interesting and exciting tech companies of the past 20 years. I welcome you to read this book if you are interested in learning more about how a group of Canadian visionaries shaped the foundation of the market for what we now call the “smartphone”.

Will Blackberry ever regain its status in the telecommunications market? Only future will tell…I can only say that in a world dominated by software and where the emergence of Virtual Reality, wide-spread A.I and the Internet moving into our everyday objects, there is plenty of room for someone to take the lead….and the race has already started.