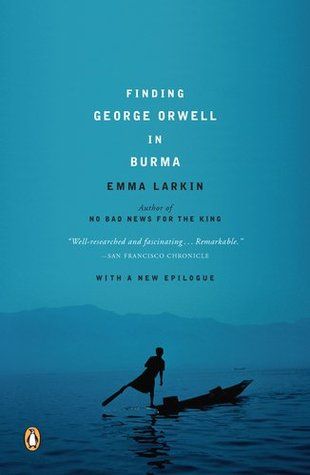 History
Reviewed a year ago by Nuno Carneiro

Myanmar (formerly known as Burma) was up to 2011 one of the most enclosed countries in the world, ruled by a military junta which successively deterred any attempt for democracy. It is also a country which was occupied as a British colony where the writer George Orwell served as a policeman in the early 20th century.

Finding George Orwell in Burma is a mix between travel and history genres. The author, Emma Larkin, visited Myanmar several times in an attempt to revisit the places where George Orwell lived and where his books' fiction seemed to have turned to reality by the actions of a totalitarian regime.

Some people in Myanmar call George Orwell 'The Prophet', because of the way his most famous books fit the recent history of the country. One of Orwell's first works 'Burmese Days' published in 1934 has definitely been inspired by the five years he spent serving as a policeman in colonial Burma. But the irony is in the way his two other books Animal Farm (1945) and Nineteen Eighty-Four (1949) could describe the political state of Myanmar after 1962.

Emma Larkin focuses the book on this parallelism between the three fiction works by Orwell and the recent history of Myanmar:

John Flory is the main character in this book, an Englishman living in Burma who gradually becomes ever more disenchanted with the colonial regime. It is thought that it is a portrait of Orwell's own disappointment with the Empire, and with his life in Burma. From these three books, this was the only one written with the intention of representing the Burmese society.

Animal Farm is a parody of Stalinism, a revolution in a farm where the pigs end up in charge. With time, the pigs become corrupt and twist the law in their favour: 'All animal are equal, but some animals are more equal than others.' Not long after Myanmar became independent, the dictator Ne Win took power in a military coup in 1962. He implemented the ruinous 'Burmese Way to Socialism' which resulted in Myanmar being one of the less developed countries in the world. Unknowingly, Orwell had written a book that could also be seen as an allegory to the socialist dictatorship of Myanmar.

Following a student revolt in 1988, the dictator resigned and military took power again. The name of the new ruling military junta was Orwelling by itself: 'State Law and Order Restoration Council'. Over the next years, coinciding with Larkin's visits to Myanmar, the dictatorial regime tightened. The way the regime censored news, or maintained a network of informers to spy on its own people are examples of actions which could just as well have happened in Nineteen Eighty Four.

'In Burma there is a joke that Orwell wrote not just one novel about the country, but three: a trilogy comprised of Burmese Days, Animal Farm and Nineteen Eighty-Four.' - Emma Larkin

For the worst reasons, it's easy to see why Orwell would be called The Prophet. Through the words of many Burmese interviewed by Emma Larkin during her visits to the country, we can get a clear picture of what kind of suffering they had to endure. Directly from former prisoners and dissidents, we find out how a few brave people fight for the memory of a people.

Exploring the places where Orwell lived

Finding George Orwell in Burma is also a memoir, a chronicle of Emma Larkin's travels to the cities where Orwell had been placed. She visits Mandalay, the Irrawaddy delta region, Yangon, Moulmein and Katha.

Larkin finds the barracks where Orwell had been stationed or a house where he could have lived. However, most buildings the author visits - such as the European club which is central in Burmese Days - have been left for abandonment, and few insights can be found there.

Therefore, I feel like the richest part of the book is the recounting of Larkin's meetings with the people of Myanmar. The way all their names had to be masked (even Emma Larkin is a pseudonym) is a consequence of the tight grip the military intelligence kept on its on people.

Some of the interviewees blame their tragedy on the British for disrupting the established power structures. It is difficult for the reader to take such conclusions, but by learning the colonial history of the country, we can slowly grasp how it has influenced Orwell, and why he became one of the most famous anti-totalitarianism champions of the 20th century.

Finding George Orwell in Burma is a nice read, entertaining and easy to follow - despite brutal at times, considering the human rights violations in the country. The vivid recounting of Emma Larkin's travel inside Myanmar provide great insights into the recent history of the country, which has not been explored by many authors.

It is also a very interesting book for Orwell fans, as the five years the author spent in Burma were very influential for his career as a writer (he decided to become a writer upon his return from Burma).

Reading this book was a special discovery for me, because I read it during a trip to Myanmar in February 2016. Visiting Myanmar was an amazing experience. Fortunately the military dictatorship ended in 2011, but democracy is not yet guaranteed. There are many signs that we are now going to see Myanmar move towards a democratic state, lets hope they are long and lasting.

In conclusion, this is not a must-read book, rather a great way to get to know more about Myanmar or about Orwell, for those interested in these topics.