Energy and Civilization: A History 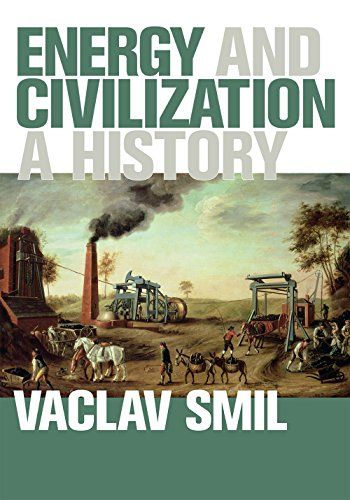 Science
Reviewed a year ago by Henrique Cruz

Vaclav Smil, distinguished professor of the University of Manitoba, Canada, has made a career of dissecting broad topics of society from food production, the history of materials to energy.

A prolific writer, with more than 40 books published under his belt, his 2017 masterpiece recounts the history of civilisation through the lenses of energy: how we've gathered, transformed and consumed energy over the past 200 000 years.

For the majority of  pre-history human foraging - the activities of acquiring and storing food and materials -  were very similar to those of our primate ancestors. The first evolutionary departure from that reality came with bipedalism, a fundamental adaptation that was incredible energy efficient -  human walking spends 75% less energy than quadrupedal and bipedal walking in chimpanzees - and liberated our arms to make tools, carry weapons and transport food.

Smil's fundamental thesis stems from developments such as human bipedalism. He argues that human progress has largely been a consequence of our ability to convert energy more and more efficiently.

Energy and Civilization is thus the story of the different energy sources and primer movers (the engines that transform energy into work) that have shaped the past 10,000 years. And Smil walks us through that history in 3 major phases.

The first chapters of the book are dedicated to pre-industrial societies. Here, from 10,000 BCE to the 17th century, major advances included the efficient use of animal labor, advances in irrigation, fertilisation, multi-cropping and the use of water and windmills.

The use of animal labor remained uneven across the world and a limiting factor in food production. For example, the use of water buffaloes in China was usually limited to 130-140 of productive days, and the use of horses was often limited to 60-80 days, mostly for plowing and seeding.

Irrigation in particular was an area of intense innovation in traditional farming societies. Crops often demand 1000t of water per ton of harvested grain, so early farmers had to be ingenious in finding ways to take water to the fields. The oldest widespread water lifting mechanism - the shaduf - was widely used in the Middle East in 2000 BC but only reached China in 500 BCE.

The pace of technology transfer is a recurring theme of the book. It is astonishing to learn how many decades (in case centuries) it used to take before new tools, machines and technologies reached mass adoption.

"Energy is the universal currency of life." - Vaclav Smil

Heat, light and transportation were the staples of progress in the fossil fuel and electricity eras. Coal was already used in China as far as 200BCE in iron production, but it was really in the 16-17th century, in response to huge shortages in wood and charcoal, that coal extraction really took off.

The following 300 years - between the 17th and 20th century - saw a great deal of innovation in the transformation of energy. This time around, most of the innovation came from Europe and North America, with breakthroughs in the development of furnaces that facilitated the transition from charcoal to coke, the steam engine, steam turbine, internal combustion engine and the discovery of electromagnetic induction.

Smil goes both wide and deep in an impressive array of different fields. You can see the amount research that must have been at the source of the book, as Smil uses calculations of energy consumption - often original -  to illustrate his points:

Fossil Fuelled Civilization and The Race to Decarbonization

"In 1800 the world consumed about 20 EJ of energy...of which 98% was phytomass, mostly wood and charcoal; by 1900 the total primary energy supply had more than doubled (to about 43 EJ...), and half of it came from fossil fuels, mostly coal.

The second half of the book is centred on the adoption of fossil fuels, the rise of renewable energy and the current state of energy consumption. Here, Smil analyzes the advances in energy conversion across the board, from faster airplanes, lighter ships, to wireless communication and the computing revolution.

With all the insights drawn from history, is it not surprising that Smil is not exactly optimistic about the decarbonization of the economy. The previous energy transitions from phytomass to coal and from coal to oil & natural gas have taken decades to become widespread, and even with all the subsidization given to renewable energy, in "2015, fossil fuels accounted for 86% of the world's primary energy, only 4% less than in 1990".

More, with the rising energy needs of millions of people in India, South East Asia and Africa, Smil believes we are still 50-100 years away from a world dominated by clean energy.

I now understand why Vaclav Smil is one of Bill Gates' favourite authors. Energy and Civilization is incredibly broad and painstakingly detailed at the same time.

It is not your typical history book. It reads more like a school manual or a technical book, and while reading it I often felt the need to look up many of the references to tools, mechanism and scientific discoveries online. Dozens of illustrations and explanatory deep dives on a topic are great in helping you make sense of the book's topics.

If your are up for the challenge, Energy and Civilization is very rewarding. It easily became one of my favourite books of all-time, and I'm already saving up the mental space for my next Smil read.