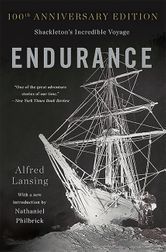 History
Reviewed a year ago by Henrique Cruz

1914 was an eventful year in history. Escalating tensions in Europe culminated in the assassination of  Archduke Franz Ferdinand, setting in motion a series of events that lead to World War I. At the same time, 2 000 kms away and in a (much) less, Ernest Shackleton and his team were about to leave for what would become of the most gruelling, intense and heroic adventures the world has ever seen.

First published in 1959, Endurance was not an instant hit. During the two previous years Alfred Lansing spent hundreds of hours interviewing the surviving crew members, devouring their logbooks and travel diaries, and transforming their stories into a book. It finally gaining prominence in the 90's and now, more 60 years after coming out, Endurance has earned its place in literary history as a go-to book on adventure and the adaptability of the human condition.

An expedition to the end of the world

The Imperial Trans-Antarctic expedition had an ambitious goal: to be the first to cross the Antarctic continent overland. Led by Ernest Shackleton, an experienced sea explorer on his third Antarctic expedition, a group 0f 28 men sailed from Buenos Aires on October 26th on a Norwegian ship initially built for tourist cruises on polar bears hunts.

The book, which bears the name of the ship used in the expedition, is divided into seven parts. Each covers a different stage - emotional and chronological - of the Trans-Antarctic adventure, from Shackleton's fundraising to get support for the trip, to the rescue of the crew almost one year after the ship was crushed in the Antarctic ice.

Life at the expedition must have been brutal. The excitement of the initial days sailing from South America gave way to apprehensiveness and worry as the ship got stuck at sea, surrounded by unmovable blocks of ice for months. Then, a few days before the closing pressure of the ice destroyed the ship, the crew had to abandon the Endurance and set camp on ice. There, vicious windy storms went on for days and hunger and tiredness became commonplace.

Lansing's descriptive account of the crew's harsh adventure is often juxtapose with snippets from their travel diaries, where we read how the crew kept their spirits up. There were countless matches of Poker and Bridge, football matches on ice, the pristine Antarctic sunrises in the presence of penguins, whales and sea lions. Shackleton and his men maintained their optimism - often more hope than reason - and discipline to keep going, personifying the incredible adaptability and strength of the human condition.

The rest is adrenaline, fear and a relentless will to live as the men endure an 850 miles journey before rescue in South Georgia, a same small, naked island they had sailed from almost 2 years before.

Endurance is just an exceptional adventure story. It is genuinely hard to believe that a group of men was able to withstand the inhospitable conditions of the Antarctic ice for so long. Immersed in Alfred Lansing's narrative, you will feel the tips of your feet cold and moveless as you imagine yourself alongside those men in the unforgiving Antarctic ice.

But get ready for nautical jargon. A lot it. Though it would certainly be expected from a book about a sea expedition, I must admit I often struggled to understand technical descriptions of the Antarctic environment and life at sea.

Still, sea-jargon aside, Endurance is an inspiring book that will, much like those men, continue to survive the test of time. Highly recommend it.