The Practice of Management 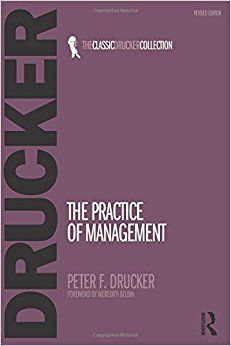 Management
Reviewed a year ago by Nuno Carneiro

What does it mean to be a manager? Is there such thing as a definition of management? Peter Drucker believed so, and his thoughts on the topic are still among the most influential in the management community. The Practice of Management was a breakthrough book, published in 1954, and exposing for the first time many important concepts such as Management by Objectives.

Peter Drucker was one of the most influential management thinkers of the 20th century. After starting his career in Europe, he moved to the US where he spent the rest of his life, advising hundreds of companies and writing a staggering total of 39 books.

The first surprise in reading The Practice of Management is how its content is still so relevant, more than 60 years after publication. For example, Drucker touches themes such as automation, or corporate social responsibility. Are there other more trendy topics in 2017? Of course, not all topics covered in the book are relevant today, and the topic of automation refers to dated technologies (pre-computers). Still, as usually is the case with great authors, Drucker's words seem to stand the test of time.

The Practice of Management is a guidebook for managers. It first establishes what management is - a multi-purpose organ with the following responsibilities:

Drucker emphasizes that managing the business is the number one responsibility of management. And managing business means being responsible for concrete business objectives to be attained. It was here, in this book, that Drucker first popularised the concept of Management by Objectives (MBO), which was to become a cornerstone of management theory.

"There is only one valid definition of business purpose: to create a customer." - Peter Drucker

Drucker doesn't evade an important question: if management should manage business, what is the purpose of business?

With great clarity, Drucker shoves away the idea that the goal of a business is the maximization of profit. Instead, he identifies the main purpose of a business as the creation of a customer. As such, Drucker believes a business has only two main functions to fulfil the goal of creating a customer: marketing and innovation.

Concerning the management of managers and management of workers and work, Drucker justifies their importance due to the nature of our society. It is the responsibility of business to provide meaningful work and opportunities to fulfil the aspirations of the members of society.

The purpose of a business is not the maximization of profit; a business is a part of society with the responsibility of providing fulfilment to the aspirations of its workers; managers must manage. - These are clear and straightforward concepts, but how often are they still forgotten in our days?

"The first requirement of management spirit, then, is a high demand on performance. Managers should not be driven, but they should drive themselves." - Peter Drucker

The Practice of Management is a very complete book, ranging from the purpose of business to organizational structuring, or the management of other workers. With over 300 pages, there is enough discussion of each of these topics, even with interesting (but dated) case studies about Sears, IBM or Ford in the early 20th century. It is on the last part, the management of workers, which I would like to dig deeper.

Drucker also sees managers as teachers, whose role is to ensure the growth and development of the people they work with. But he believes that motivation doesn't come from job satisfaction, it comes from an urge to improve and achieve peak performance.

Another interesting concept which resonated with me was the idea that performance, not "potential", should be used when evaluating who to promote. In other words, when considering a promotion, look for those who effectively showed to be able to achieve objectives, rather than those who promote themselves.

In a concise way, Drucker summarizes the actual components of the work day of a manager in five points:

"Who is a manager can be defined only by a man's function and by the contribution he is expected to make. And the function which distinguishes the manager above all is his educational one. The one contribution he is uniquely expected to make is to give others vision and ability to perform. It is vision and moral responsibility that, in the last analysis, define the manager." - Peter Drucker

I am a huge fan of Peter Drucker. This book completely fulfilled my expectations for great foundations on the role of managers and even of business itself.

However, it must also be said that The Practice of Management is not an easy book to read. It took me a couple of months to finish it (with many pauses). I always feel that the reader's life would be much easier if Drucker would use more commas in his sentences. The middle part of the book, on how to organise a company, feels the most dated and less applicable nowadays. I really like what Drucker writes about and I found a lot of guidance in his ideas, but I am not such a big fan of the way he writes.

Another drawback in Drucker's work, which I've noticed in other of his books, is that he provides no evidence in the form of social studies to support his opinions. Although for me, his opinion, and the way he exposes it, is enough.

More than a book about how to be a manager, I felt it was a great book to understand why I should be a (good) manager. If you're considering a career in management, reading Peter Drucker is a must.

The Five Dysfunctions of a Team

By Patrick Lencioni (2002) Pages: 202, Final verdict: Should-read What does it take to make a great team? No matter where you look, from heartened stories of sports teams winning against all odds to Marvel super-hero movies, a strong team is always depicted as the foundation for success. Patrick Lencioni... Read more

By Jim Collins (2001) Pages: 210, Final verdict: Should-read Can a good company become a great company and, if so, how? This is the question answered in the 2001 best-seller Good to Great by Jim Collins, an American former business consultant, researcher and author. Collins's first book, Built to Last,... Read more 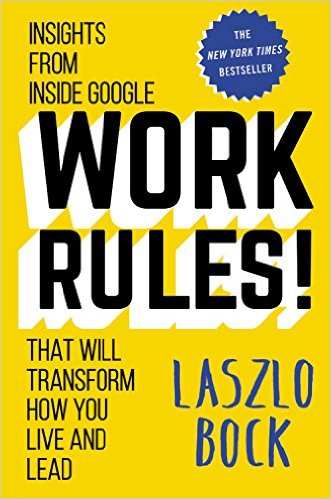 Work Rules! Insights from Inside Google That Will Transform How You Live and Lead

By Laszlo Bock (2015) Pages: 406,Final verdict: Great-read What makes Google such a great place to work? In the past 10 years, the search giant has been named topped Forbes "Best Companies to work for" 7 times [http://fortune.com/best-companies/] and is seen by many as the dream... Read more