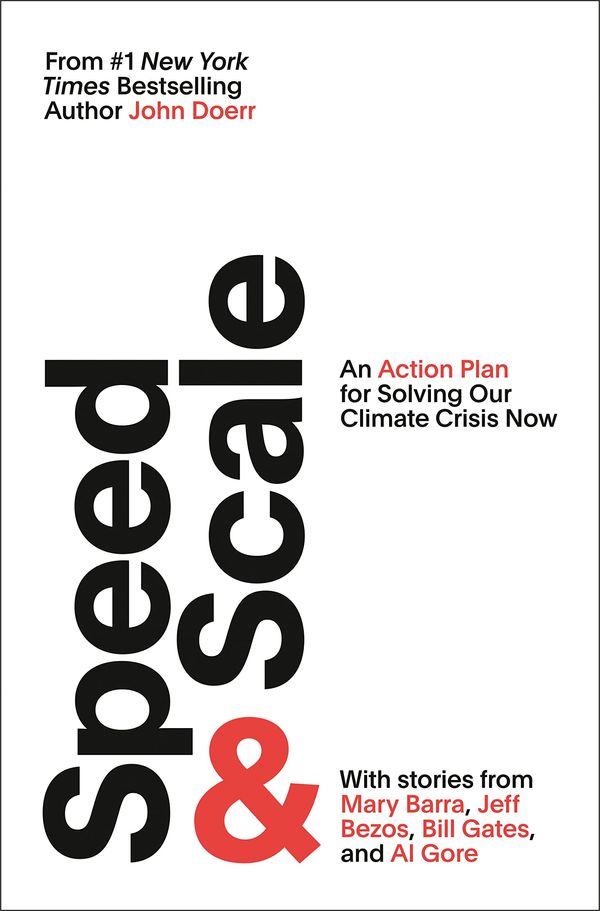 Reviewed 11 days ago by Henrique Cruz

John Doerr is one of the most legendary venture capitalists in the world. A partner at Kleiner Perkins, he is most famous for leading the firm's investment in Amazon in 1995, and in Google in 1999.

Doerr is also an advocate for climate tech, and not a new one.  In 2007 he delivered an emotional TED Talk that changed his life. It all began after watching Al Gore's Inconvenient Truth documentary. Like many of us, this was Doerr's realization that something had to be done. But unlike most of us, he got to work and did something about it. Now, more than 15 years later, Doerr is a leading climate tech advocate, avid climate tech investor, philanthropist - Doerr recently donate $1B to fund climate research at Stanford - and an author. Speed and Scale is Doerr's plan to get us to net zero carbon emissions by 2050.

A plan to solve climate

Bill Gates and John Doerr have plenty in common. Billions aside, they share a quantitative approach to climate change. It all starts with one number: 59. That's the sum of all human-caused emissions of greenhouse gases. If the world wants to get to carbon neutrality, those are all the billion of tons of CO2 (or equivalent) emissions we need to wipe out. And that's a huge number. Picture a fully loaded aircraft carrier. 10,000 of those make 1 Gigaton.

Is solving climate change more complex than winning World War 2? Probably. But that does not mean we shouldn't have a clear, logical action plan to solve. That's Doerr's motto behind Speed and Scale: An actionable, traceable plan to reduce net carbon emissions to 0 by 2050.

And the #1 selling point of the book really is clarity. Doerr breaks the plan 6 objectives, that branch into +50 key results, easy enough for anyone to follow:

The men behind the carbon (neutrality)

Numbers. Prices per megawatts of different energy sources, greenhouse gas emissions by kilogram of food type, how much plastic trash China (no longer) imports, there's plenty to go around. And some of them display the incredible pace of innovation in some sectors of the green economy. Take Ørsted, the Danish multinational energy company that is the world leader in wind turbines. Their 2017 Burbo Bank Extension turbine produces 17x more energy than their 1991 model, with a massive diameter of 113m - that's more than twice the length of a Boeing 747.

Perhaps my favorite feature of the book is how well Doerr combines the relevant background that he uses to navigate through each objective of the plan with stories of entrepreneurs, activists, government initiatives and company executives who are leading the charge in the green economy.

One of the most intriguing industries to follow is carbon removal, that Doerr - along with Gates and many others - believe will be necessary to reach net zero emissions. This means it won't be enough to stop emitting, we need to remove existing carbon from the atmosphere and oceans and deposit back inside the ground. One of those stories is about Stripe, that together with Alphabet, Shopify, Meta, McKinsey, committed to buying US$925M worth of carbon removal in advance in an attempt to accelerate the market for permanent, scalable carbon capture solutions.

Philanthropy spending towards climate action accounts for less than 2% of total giving. And globally we're yet to reach peak greenhouse gas emissions (apart from a 4% drop in 2020 as a side-effect of the pandemic).

Speed and Scale wants to change both. Inspire big donors to devote more spending to climate action and arm business executives, entrepreneurs and politicians with a plan that prompts them to action.

Unfortunately, the plan got off track the minute the book hit the bookstores. Reaching net zero emissions by 2050 is in practice impossible, and that fact weakens the narrative that underpins the book. I'm all in for the "aim for the moon. If you miss, you might hit a star" ambition, but I wonder how much it skews the discussion away from what's really important - doing the actual work to reduce emissions.

That aside, we're short on content that turns ambition into plans. And that's Speed and Scale is all about.