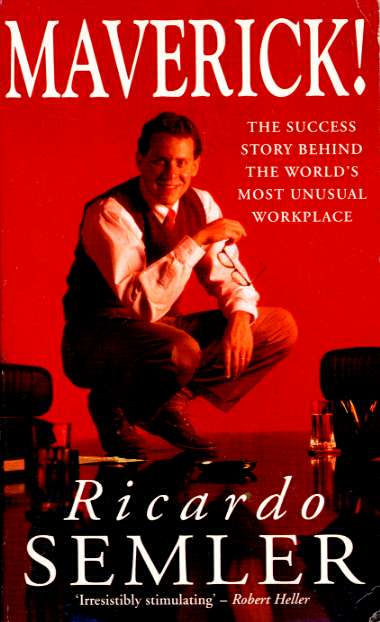 Maverick tells the story of Ricardo Semler as the CEO of Semco, a Brazilian industrial machinery supplier, in the '80s. Semler won several prizes and Semco is up to this day one of the most popular places to work in Latin America. But Maverick is also about getting rejected at Harvard Business School or suffering from a 40% drop in sales in two years.

Making people look forward to coming to work in the morning

Ricardo Semler took over the family company from his father in his twenties and was soon working hard to keep business going. As one of his first moves as a young executive, he let go of most of the top managers. Tradition was no longer to define Semco.

Over the following years, Semler and his team set to build a culture of participation at the company. Their main idea was that workers should be trusted and treated as adults. As an example, it was common practice that employees were subject to a security check when entering and leaving the factory grounds. This practice was dismissed at Semco as a sign that factory workers should be trusted by their managers.

"Have thefts and time-card cheating increased or decreased? I don't know and I don't care. It's not worth it to me to have a company at which you don't trust the people with whom you work." - Ricardo Semler, Maverick

Many new management practices followed suit: flexible working hours, workers setting their own targets for production, establishment of factory committees to participate in the most important management decisions and even the separation of whole factories in two, after the realization that too big factories would greatly reduce workers involvement and participation (this concept was also explored by Malcolm Gladwell in the critically acclaimed book The Tipping Point).

Trust in the managers was however not there from the beginning. Worker unions fought hard against some of the measures. Even so, strikes were accepted by Semler and the most active protesters became in time formidable agents of change.

Towards the end of the book, we get a picture of a whole new company. As the Brazilian economy plunged, with inflation rates of 400% a year, the flexibility instilled in Semco's processes was even more valuable. With decreasing sales and millions of dollars in unpaid receivables, Semler then devises a plan to focus on the most value-creating parts of the business and outsources other activities to his own workers by helping them set up their own companies. Finally, Semco no longer needs a CEO and Semler reduces his involvement in the company.

Great leaders show us a meaning for our work

The most fascinating thing about *Maverick* is Semler's vision that he (the boss) should share his power and earnings at the company, because that is the best way to retain a motivated and engaged group of collaborators at all levels, and ensure the sustainability of the business. However simple that concept may be, it is unfortunately still misinterpreted by many bosses today.

I believe that one of the most important success factors at Semco was the ability to attract highly talented leaders and providing them the freedom to implement their ideas. Furthermore, Semler's realization that that a group will make a better decision than one single person, in combination with the promotion of decisive decision making, allowed him to unleash the creativity of Semco employees.

Maverick is definitely a must-read for all those who want to improve their workplace relations.