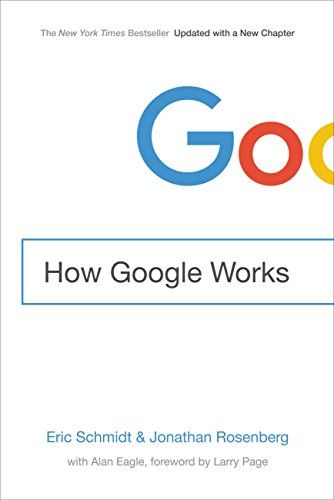 Business Management
Reviewed a year ago by Nuno Carneiro

By Eric Schmidt and Jonathan Rosenberg (2014)

Have you ever been curious about the way Google works? Did you know that 1 spreadsheet was Google's main tool for managing resources for many years? This is not a business best-practice book. This is a book about one of the most innovating companies in the world and its uncommon management practices.

Eric Schmidt, current Chairman and ex-CEO, and Jonathan Rosenberg, former Senior Vice-President of Products of Google bring us great insights into how they built up Google between 2002 and 2013 in an interesting and, sometimes funny way.

Hire as many talented engineers as possible and give them freedom

Eric Schmidt and Jonathan Rosenberg make the point that Google employees (Googlers) are not knowledge workers, but smart creatives. Smart creatives should be creative, passionate, analytical, brilliant and work hard to change the status quo. And if Googlers have all these traits, you can't manage them with old-fashioned rules, you definitely can't tell them how to think. Here starts the "Google way": to create a work environment where smart creative individuals want to come back everyday.

From the early days, Larry Page and Sergey Brin established the rule that this would be a company of engineers. "How many engineers do we need? Ten thousand? Make it one million!"

"For a manager, the right answer to the question 'What is the single most important thing you do at work?' is hiring.", by Eric Schmidt and Jonathan Rosenberg

The Google offices have been built to convey the message of being a place where smart engineers can think about changing the world. Hence, they built a campus which would resemble a University, with lots of sports facilities, cafeterias and crowded office spaces: the best known environment to breed innovation.

The most interesting part of the book was learning about how much Google invests in recruiting. After reading the funny story of how Jonathan Rosenberg was hired after getting Sergey Brin's attention during the interview by telling him about his method to 'hook at first date', we get great insights into how Google recruits new talent:

All in all, recruiting is mentioned to be the most important activity at Google and it is easy to understand why: who wouldn't want to work together with the most talented individuals in the world?

The core of Google's work culture

It seems that the creative Googlers are at the core of the business and Eric Schmidt shares some really good management practices which all of us can use.

We get the idea that transparency and freedom to follow your own ideas are crucial for keeping the whole team together and motivated. And how did they decide what to do with their motivated team? Google used their so called 70-20-10 rule for allocating their resources (headcount):

The authors point out that Google's most successful products were based on strong technical advantages (e.g. Google AdSense advertising). Their advice is that if you don't know what is the the technical insight your product brings, you should go back and rethink it.

"Don't stigmatize the team that failed: make sure they land good internal jobs. The next innovators will be watching.", by Eric Schmidt and Jonathan Rosenberg

In addition, they also advocate for open source development as the best way to quickly scale a product (e.g. Android mobile OS). Finally, there's an advice which you often hear from successful managers (so it must be true!): promote the individuals who try to innovate, even when they fail.

How Google Works has great insights about the things which made Google one of the most innovative companies in the world. I am quite sure that the authors never wanted this to be the typical management practice book, but rather a description of their personal views about what made their company great (interesting detail: the book is narrated in the first-person plural as "we").

The writing itself is great, the authors made a good job in making this a very entertaining book to read, with almost every second page having a funny joke.

I would definitely recommend reading this book if you ever wanted to learn more about Google, if you're into recruiting (or if you feel like being entertained by Eric Schmidt's jokes). And as the authors conclude at the end of the book: I hope this book will inspire you to build the next big thing, maybe the company which will render Google irrelevant!

(Since the publishing of the book, Google has been re-organized into a mother company called Alphabet, but I believe all of the Googley characteristics are still valid.)