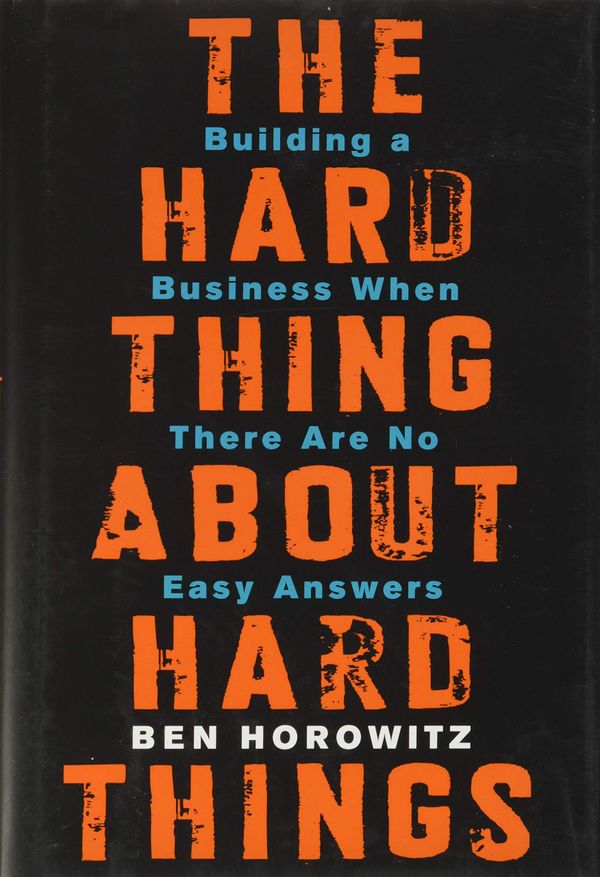 A Silicon Valley icon and investor in Facebook and AirBnb, Ben Horowitz has journeyed from startup founder to venture capitalist, and has become one of the most influential entrepreneurs of our generation. Here is a look at his 2014's book.

Unlike the title, the pitch of "The Hard Thing About Hard Things" is quite simple:

Management books typically provide you with a recipe for building a successful company. That works wonders... until you screw up. Is it then that things became hard, really f*****cking hard. And for the hard things in life... there is no recipe.

The book kicks off as a short biography of Ben and his young life in Berkeley. He recollects stories of his teenage years, from making it to the high school football team, to the blind date that led to his marriage.

He also talks about being obsessed with hip-hop, which is illustrated by having all chapters of the book start with a few bars from his hip-hop idols.

Then, after a tour through his early days, we have a quick glimpse of his life in the tech world:

After a tour of his entrepreneurial life, the remaining of the book is dedicated to "The Struggle", the "hard things" that someone in a leadership position must face, and Ben's way of dealing with them.

We are taken through the highs and the lows of being in charge. From funding to managing and firing, we are immersed into the schizophrenic life of a CEO.

Here the book really comes to life, as we have a sense of just how difficult it is to lead an organization to success. And even tough him and Marc Andreessen ended up reaching the top of the entrepreneurship mountain, it would be an understatement to call it a bumpy road. After all, how do you cope with a crash that sweeps off 80% of NASDAQ's value or being called out by Bloomberg as having pulled out an "IPO from hell" ?

Most of us can't, and learning from one of the best entrepreneurs of our time is what makes the book great.

"Life is struggle". I believe that within that quote lies the most important lesson in entrepreneurship: Embrace the struggle

There at least a couple dozen lessons one can take from the book. Here are some of them:

Not afraid of being politically incorrect and always true to himself, he bashes on some of sharks of the financial world and recollects how he used to wake up in the middle of the night sobbing, doubting himself and his competency as a CEO.

Finally, he tells us other personal dilemas of a CEO, how to (try to) avoid the classic phycological meltdown and under which conditions you should you sell your company.

This book is not meant for everyone. Practical and filled with examples from Ben's life and the tech world, this is far from your typical management book. If you are with the right mindset tough, this is a fantastic book and a must read.

And who is this book for?

My advice?
This book deals with topics you won't find in any other management books so take one afternoon of you life, make yourself comfortable, and enter the world of the tech CEO.

As Ben's put it in his introduction chapter:

This the real world, homie, school finished.
They done stole your dreams, you dunno who did it.
Kanye West, "Gorgeous"