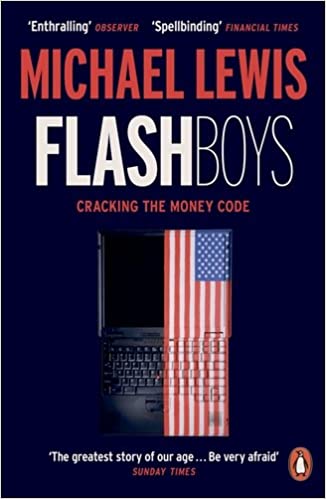 One of the most shockingly astonishing stories since the financial crisis of 2008.

In what was probably the best book I’ve read in 2015, Michael Lewis shares with us the surprisingly inner workings of the most lucrative industry in the world, and how a group of courageous minds are working to bring fairness to a game which is rigged.

Once upon a time there was a cable that connect the Chicago Mercantile Exchange to the New York Stock Exchange datacenter in New Jersey. The price to rent the infrastructure: 10.6M$ for five years. The benefit: 13 milliseconds in the round trip travel time (20x faster than the blink of an eye). And why? Welcome to the world of high-frequency trading (HFT), where every (micro)second counts.

If you ever seen the Wolf of Wall Street, you might picture trading as an activity ruled by loud men in expensive suits who work in a poetic symbiosis with their desk phones. That is not the case anymore. Computers and technology have taken that activity by storm, and in the dawn of the 2008 financial crisis speed took the lead as the holy grail of financial success.

The book explores how the deregulation of the exchange market allowed for the proliferation of institutions from which investors could buy and sell stock. This fragmentation of the market gave an opportunity to those firms who had efficient trading algorithms leveraged by state of the art infrastructure to reach exchanges as fast as possible (the so called high frequency trading firms).

The premisse is simple. You want to buy or sell a stock. You see that the stock is trading at 100$ a share, and as you press the "Buy/Sell" button, the price moves, and the stock goes up. You are now forced to buy at a higher price, and someone else just won that race.

And how does that happen? A better insight from the inner workings of the HFT comes from understanding 3 of their preferred strategies:

The story of the book revolves around Brad Katsuyama, a trader turned hero.

Frustration was growing by the day as the trader from the Royal Bank of Canada could never seem to buy any stock at the market price. As he understood what was going on and became restless with the apparent inertia of RBC to do something to about the problem, he decided to quit. With little more than an idea in the back of his mind, he leaves his 2 million $ yearly contract to create a new stock exchange, which would play the game the right way.

“That’s when I realized the markets were rigged. And I knew It had to do with the technology” Brad Katsuyama

The book follows the inception of the Investors Exchange (IEX), the "fair stock exchange". From finding a team to experimenting with real trades to find data patterns, it is a treat for the eyes to read about Brad's quest.

A few of my favorite highlights of Brad's story include:

And how does IEX fight predatory trading? The exchange introduced a 350 microseconds of latency to all orders, blocked all privileges normally given to HFT (such as co-location or special access to investors information) and simplified the types of orders allowed in the exchange.

As for the success of IEX, and ever since it started operating in October of 2013, it has seen steady growth in their trading volume, with more than 100M trades a day (> 1,5% of the total market).

A fascinating book written by an even better storyteller, Flash Boys will appeal both to the fans of fiction and non-fiction alike. All chapters of the book feel connected to the main story, even as the reader is forced to hop between the truth behind trading, the effect of financial regulation on the stock market, the trial and conviction of a HFTrader, and more.

Flash boys makes my shortlist for best books I've read in 2015. If you give Michael Lewis a shot, you will understand why.