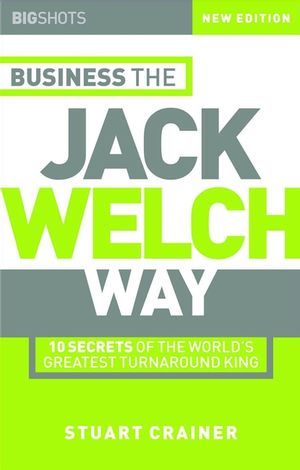 Business Management
Reviewed a year ago by Henrique Cruz

Jack Welch is one of the most iconic CEOs of the last decades. Commander and Chief of General Electric for 20 years, he led the company to grow its revenue 3x, and the company value 16x (!) to 79B$.

In Business the Jack Welch Way, the former editor of TIMES magazine, Stuart Crainer, gives us a short glimpse into Jack's life and guides us through a simple set of principles that shaped the career of GE's CEO.

The first to go to university from his family, Jack became fascinated with engineering through an uncle who worked as a mechanic at an electrical power plant. Soon after that, fresh from a chemical engineering degree from the University of Illinois, Jack joins GE's division of plastics, in 1960. He never left. And even though it was not love at first sight, GE grew on Jack and the successive challenges (and results) gave him the confidence to steadily climb the american corporate ladder. Then, 20 years in and after leading the consumer goods division of GE, he got the call to transition into CEO in 1980.

He was now at the top of the hill, and his career as CEO can be summed up into 3 phases:

Jack's first decade at the helm of GE was characterized by the need to "put the house in order". Among the most decisive strategies was the need to downsize more than 200k employees, and killing several non-lucrative lines of business of the company. Not surprisingly, he was voted "Toughest boss in America" in a 1984 Fortune Magazine Poll.

The first half of the 90s was GE's time to prove that the deep restructuring would be proven effective. And while Bryan Adams and Celine Dion were rocking the charts in entertainment, it was once again Jack who was dominating the corporate world. The WorkOut program initiated in that era served as to break internal communication barriers in GE, and introduced the idea of having multi-day events where people from all sides of the company would get together to tackle "hard" problems.

A few years pass by and a new challenged is embraced by GE: turning their money making machine into a quality money making machine. Borrowing the framework from the success of Motorola, Welch spends the second half of the 90s implementing the 6σ, gaining than 600 M$ of savings in return. GE helped shaped the way to what is now one of the most prominent process improvement tools in manufacturing, and although not extensively, we get some understanding of how that was done.

"The most acclaimed SoB from the last decade is the best CEO of this" - Industry week on Jack Welch, 1994

The biggest part of the book is around the 10 management ideals that were implemented at GE by Welch, and how that helped fuel the growth of the company. It is on the examples and stories of the implementation of those ideals that the book comes to live, and where the reader can have a sense of the CEO's transformation of GE.

To give you a glimpse of what each chapter is about, here is a list of the 10 management ideas together with examples of what they are all about:

Jack Welch is indubitably one of the best executives of our time. By reading Business the Jack Welch Way we get the chance to learn more about Jack's humble upbringing, his career at GE and a few of the ideas that defined his 20 years as the company top executive.

Although I am always sceptic of anything that sums up management into "rules" our "principles", Stuart Crainer does a good job in mapping those ideas with examples from both GE and other organizations. A few of the topics have been overly simplified, drawing only minor comparisons with the reality of GE, causing those chapters to lack depth.

All in all, I would recommend Business the Jack Welch Way to anyone interested in knowing more about the man and the company that are were one of the best representatives of the corporate America ideal (both good and bad).